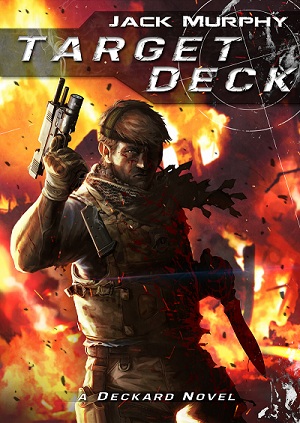 I was hoping to get a review of Jack’s first novel, Reflexive Fire, up before this, but it’ll have to wait.  Suffice it to say that it’s awesome, but Jack has ratcheted things up a little in this latest installment of the Deckard novels.

The aftermath of the bloodletting in Reflexive Fire has Deckard’s PMC, Samruk International, pared down to little more than two platoons.  Those two platoons open the book with a successful strike on a south Mexico cartel leader, followed by signing a contract with the surviving police chief in the area to take care of the cartel problem.  It’s sort of a “sign this, now,” sort of arrangement, but she doesn’t seem to mind later on, as Deckard and his boys start savaging the cartels in southern Mexico.

A lot of what is happening as background for the book will be familiar to anyone who has kept an eye on the deteriorating situation in Mexico.  While Deckard’s operation is in the south, in what is presently disputed territory near Guatemala, the Zetas and Sinaloa cartel are featured prominently in the background.  The Zapatista rebels in Chiapas even make several appearances.  Jack even brings Fast and Furious into the mix, along with questionable black operations being run by shadowy individuals in the corridors of power.

The action sequences are frequent and well done.  The carnage in places is pretty intense, though anyone who’s been keeping even one eye on the war in Mexico would know that it’s by no means in excess of what has been happening down there.

Deckard is getting reckless, fueled more by his own sense of rage and justice than anything else.  He almost goes down a couple times in this book, just from pushing himself past the limits of his endurance.  It’s going to be interesting to see where Jack is taking this.

All in all, it’s a great read, and will keep you turning pages.  I highly recommend it, along with its predecessor, Reflexive Fire, and the PROMIS series, which follows Deckard’s father through the proxy wars of the Cold War.