There’s a lot going on this October. It’s been a busy year, and some of it I haven’t been able to talk about yet. With Area Denial having come out as the seventh Maelstrom Rising book just last month, a new option has become available through KDP Print: Hardcovers. I got the proof for Escalation just a couple weeks ago, and that volume is now available in hardcover on Amazon. The system’s still in Beta, so I’m taking it carefully, one volume at a time. Holding Action should be up soon. So far, I’m impressed. The proof printed beautifully, and the binding is solid. The rest of the series will be out in hardcover over the next couple of months, and hopefully Power Vacuum will come out in Kindle, paperback, and hardcover on release. I’m wrapping up the first draft of the third book in a series I’m writing for Nick Cole’s and Jason Anspach’s Wargate Books. Nick approached me about this project a few months ago. Three more books to get written than I’d had planned for this year, but when somebody like Nick asks, you say, “Yes.” It’s a little different. Recon Marines meet a world of myths and monsters. There’s some of my

I’ve been a bit quiet lately, I know.  That’s because I’ve been a little busy.  The business side of this author thing is getting a bit of a shakeup. I’ve recently been picking James Rosone’s brain on marketing.  He’s been doing rather better at this than I have, and he’s had some wisdom to impart.  So, I’ve been trying to put it into practice. The Maelstrom Rising series is now something of my flagship series, and James has strongly suggested that I concentrate on it for the time being.  You might have noticed new covers in the sidebar.  That’s part of the shakeup. It’s also why Strategic Assets has been moved to the front of the queue.  (And yes, if you click on the image, it will take you to a preorder link.)  Enemy of My Enemy is still in the works, but the Brannigan’s Blackhearts series needs some more work. I also got Strategic Assets outlined in two days, started the first draft on Friday, and it’s already over 13k words in.  Pulp Speed is back, folks.  Hopefully I can maintain it, because this series got big.  (As in, “probably 14 books long, not counting the anthology” big.)  Trying to give the broad

Yesterday, a friend posted on Facebook that the Lord of the Rings movies did the character of Boromir dirty.  I countered that those movies did every character dirty, with the possible exception of Sam and Gollum.  The best parts of the movies are the visuals and the soundtrack. This is because Peter Jackson, Phillipa Boyens, and Fran Walsh don’t actually understand Tolkien’s work.  They certainly lack his subtlety.  (Yes, I’m going to go into some detail on what they got wrong.  Some.  Those who don’t like people trashing movies for screwing with the source material might want to stop reading now.  Because I’m not going to stop, because it’s my blog.)  And every character change they made watered down the character. First of all, Aragorn didn’t need an arc, where he agonizes and broods, worried that he shouldn’t be king because wanting power is bad.  Because The Lord of the Rings isn’t the entirety of his story.  It’s the culminating chapter of a long life of hardship, toil, and duty, that has led him to this point, where it is time to take up the mantle left to him.  He’s got the experience, he’s got the hard-won wisdom, and he knows that

Well, Crimson Star has been out for a little over a week and a half, and it’s doing pretty well.  A few reviews are in, and some of you have said it’s actually your favorite of the series so far.  Some of that seems to be because a lot of it is much more irregular warfare, more reminiscent of the American Praetorians series.  To that, all I have to say is that as the war drags on, and more expensive (and irreplaceable) assets get taken off the board, the more irregular this next World War is going to get. I was planning for Hank and his section to head out into the Pacific after the Chinese following Crimson Star, but now that the first volume of his arc is done, it’s not looking quite so cut and dried.  The state of affairs CONUS is bad enough that the response is going to take time.  At any rate, we’ll be back to Matt’s Grex Luporum Team in the ETO with Strategic Assets later on this year. Before that comes Brannigan’s Blackhearts #8 – Enemy of My Enemy.  That’s going to be fun (we may see a certain Russian mobster again from Fury in the Gulf). However,

There’s been a lot of talk lately about “subverting expectations” in storytelling, due to the recent ending of Game of Thrones.  So, since I’m a storyteller, let’s take a bit of an aside to discuss it. Much of the praise that George R. R. Martin’s book series, A Song of Ice and Fire received was about how it didn’t play it safe.  It “subverted” the old fantasy tropes (which, admittedly, had been largely done to death by Tolkien copycats who didn’t understand Tolkien).  Unexpected things happened.  The good guys didn’t win just because they were the good guys.  (It was sometimes hard to tell who the good guys were.) Now, some of this was simply marketing.  To listen to some people, you’d think that George Martin invented moral shades of gray in fantasy fiction.  David Gemmell, Glen Cook, and a host of others beat him to it by decades. Full disclosure: I read the first three books, the year that the TV show started.  I quit after A Storm of Swords.  And a great deal of that decision was based on the nature of this “subverting expectations” model of storytelling.

As the 21st Century has matured, the divide in the United States has gotten more and more pronounced.  While in many ways it is tribal (simply look at what either major political faction will scream bloody murder about when they are the opposition, and then look the other way when it is done while their people are in office), there is a fundamental fracture in the fabric of American society.  And that fissure is deepening. More and more voices call for the utter destruction of anyone who disagrees with them, no matter how petty or nonsensical the disagreement is.  A side with more and more power is demanding that things that are more and more demonstrably false and counter-factual be held up as right, true, and good, and threaten the livelihoods, or the lives, of anyone who refuses. The fracture appears to be largely along political lines.  But it has become much deeper than that, a cultural divide between people who assume the worst of each other, in some cases simply because of the color of skin.  And the politicians and tech giants who make their millions use that divide more and more, stoking the fires of the mob for

By the beginning of the Maelstrom Rising series, the global order as it has existed since shortly after the fall of the Berlin Wall and the collapse of the Warsaw Pact is disintegrating. This is happening for reasons cultural, political, and economic.  Culturally, the European Union is already fracturing as this is written.  There is no “European Identity,” no matter how hard the EU Parliament has attempted to enforce it, and the influx of immigrants from the Middle East and North Africa has been a source of friction in France for decades, even before the more recent push to accept hundreds of thousands from Syria, which has resulted in an uptick of terror attacks, to include truck attacks on Christmas markets and other crowds in Germany.  An increasingly large segment of the populace of Western Europe is beginning to resent the imposition of the will of the elites, most evident in the Yellow Vest protests in France, which began over gas taxes, but became much wider in scope, including over President Macron’s signing of the UN resolution declaring unfettered migration as a fundamental human right, despite the majority of Frenchmen opposing such a treaty.

While the first-person narrative of the Maelstrom Rising series will limit each book or phase to a particular theater, the events of the series will have global scope.  The interconnectedness of current global politics and economics mean that when the order breaks down in one place, there will be ripples elsewhere.  And multiple simultaneous such breakdowns lead to the perfect storm that is Maelstrom Rising. The events in East Asia and the Western Pacific during this series will be rooted in current trends already happening over the last ten years or more.  While most open focus has been on China and North Korea (which will be dealt with in later installments of this article series), this article will look at the near future of Japan.  Specifically, the near future of Japan as a military power.

The idea for my current work in progress came a couple years back.  It involved a complete breakdown in what we have come to consider the “global world order” since the disintegration of the Soviet Union and the paradigm shift represented by Operation Desert Storm (though the whirlwind victory and subsequent return to the status quo represented by that short-lived war turned out to be more of a fluke than a lasting reality, despite it forming the basis for most of Tom Clancy’s post-Cold-War fiction).  While the American Praetorian series had already represented some of a similar model of breakdown, it was largely focused on the continuing war against jihadism, and that war’s unintended consequences. This is something different.

I’ve had to do some research into possible near-future weapons systems for a couple of series, now.  If you’ve read The Colonel Has A Plan, you might have noticed that the Marines under Colonel John Brannigan are using M27s and LSAT machineguns instead of the current M4s and M249s or M240s.  Similarly, the Marines at Camp David in Lex Talionis are armed with M27s. Now, arming Marines with M27s is an easy choice, since the Marine Corps recently announced a wider deployment of the glorified HK 416s, but it touches on a common theme when writing near-future military fiction.  Including new weapons and gear that isn’t necessarily in common use yet helps to establish your setting. 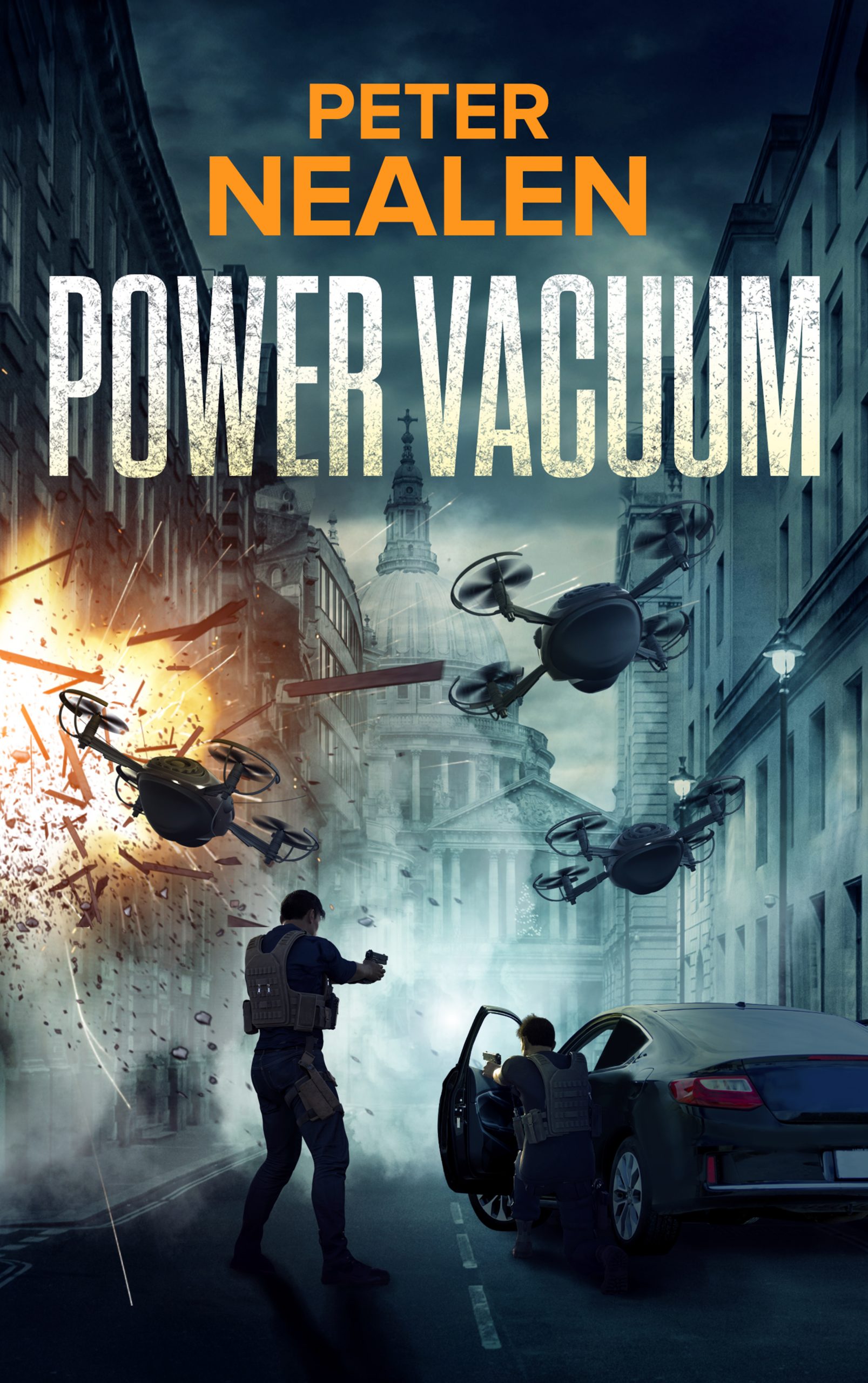