I originally wrote this for Breach-Bang-Clear a while back, but it seems to have gotten lost in the shuffle, so here it is.

Line in the Valley is hard to categorize.  It’s a crime novel, a war novel, and a psychological study of men under the highest possible stress in combat, all at the same time.  It’s set against a backdrop of an invasion of South Texas, but that really only sets the background against which the events take place. 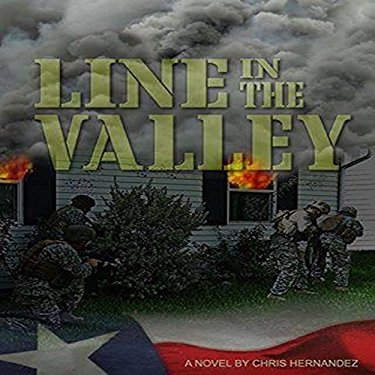 The story starts off with a bang, as advance elements made up of local gang-bangers eliminate all the cops in the target border towns.  It then follows the initial response, which goes very badly, before we get into the nitty gritty of the counterattack, which is where the meat of the story happens.

The initial push into the town of Arriago is led by a National Guard platoon.  Their platoon sergeant is an old soldier as well as a cop, hero of a previous terrorist attack in Houston.  He’s facing the real possibility of losing his family at the beginning of the story, as his wife threatens to leave if he saddles up for the Guard again when he gets the call.  He goes anyway.

Pushing into the town, they see the atrocities that the invaders have wrought on the local populace.  It’s pretty gruesome.  And it’s here where the story gets really dark.  I don’t want to spoil too much of what happens, but there is a backlash in reaction to the atrocities, and it gets…a little out of control.  The events of that chapter proceed to overshadow everything that comes next, even as this same platoon gets thrown into what amounts to the Battle of Fallujah on the Rio Grande, cranked up to 11.

The combat scenes are visceral and brutal.  It is a very realistic portrayal of urban warfare as it is presently fought by the US, along with the uncertainty and constant tension of moving through a hostile urban environment.  Chris nailed every facet of it.  Booby traps, ambushes, snipers…the troops take fire and can’t tell where it’s coming from, desperately trying to pin down where the bad guys are while staying alive and coordinating.  Very few of the kills are confirmed, at first—just like in real life.  Take a shot, the target disappears, you don’t know if you got him or if he just moved as soon as the trigger broke.  Line in the Valley captures all of it.

It’s not flawless, though.  Two major things stand out.  The enemy is, perhaps, a little bit too well calculated to push the reader’s buttons.  They are a vaguely possible alliance of complete monsters, a faceless army of psychopaths invading the Continental US for reasons that are never made clear.  They’re almost a MacGuffin (a plot device that exists purely to advance the plot—think the case in Ronin).  They act like ISIS on steroids.  They appear to be little beyond a catalyst for the story and the battles, as well as an easily hated adversary.  They also have a bit too much of a tendency to be one or two steps ahead of the troops sent in after them, even after they’ve taken a hell of a pounding themselves.

The way the events referred to above, that overshadow the rest, play out is also rather…unsatisfying.  Chris seems to be getting a little bit up on a soapbox, and the story suffers a little because of it.  Again, without spoiling too much, there’s a bit of a deus ex machina at the end that reads like a bit of a cop-out.  There was the possibility to explore some repercussions that wasn’t taken.

All told, though, it is an excellent, if extremely dark, and somewhat disturbing at times, war story of a desperate fight to defend US soil.  Well written, it will put you in the middle of a column walking down a disturbingly empty street, waiting for the next horror to be sprung on you and your brothers.