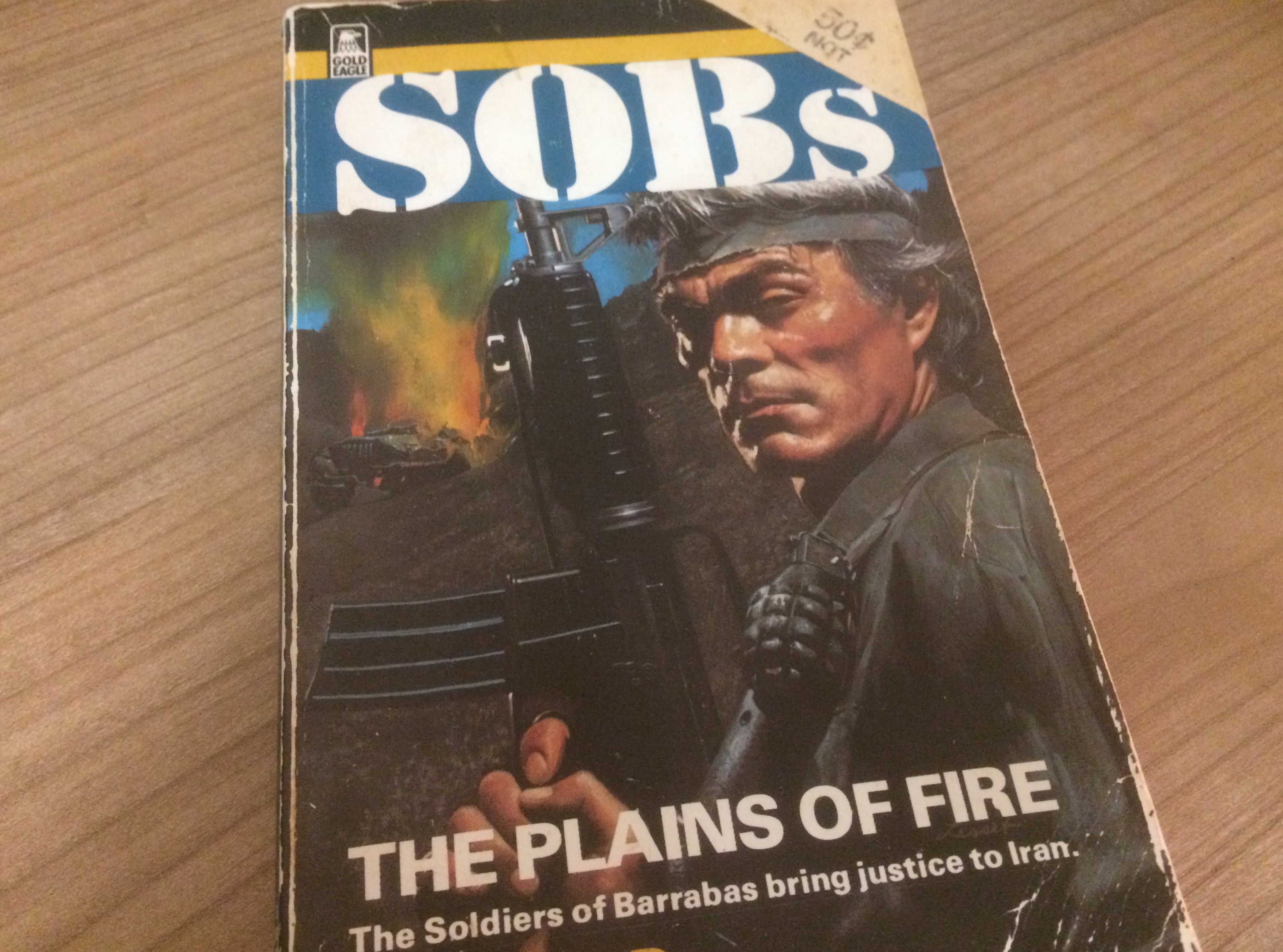 This was my first SOBs novel.  And at the time, I was simply interested in the premise.  Iran goes nuclear.  It was a pretty high-profile concern a few years ago, and has been simmering in the background ever since.  There was even a documentary made about it, Iranium.  With Mahmoud Ahmadinejad, an avowed “Twelver” as President of Iran, the likelihood of Iranian nukes soon being used against the US and Israel seemed to be pretty high.  So imagine my curiosity when I found out that an obscure, 1984 Gold Eagle pulp mercenary story had been written about just that: stopping Iran from launching a nuclear attack.

Somewhat to my surprise, it turned out to be a tight, fast-paced, actually reasonably realistic action story.  There isn’t a lot of intrigue involved; it’s mainly just getting the mission, getting in, doing the mission despite setbacks, and getting out.

Now, I’d read a couple of newer Stony Man titles before this, and immediately found that SOBs, rather than the “pseudo-SOF” setup of Stony Man, was a bit more on the grittier side of the spectrum.  While it’s not as evident as it turned out to be in the first book, travel and logistics being facilitated through the global underground was still very much a factor in The Plains of Fire.  The SOBs are supposed to be a dirty-tricks squad, deniably contracted by Walker Jessup, the mammoth CIA officer and “fixer” first introduced in Vietnam in The Barrabas Run.  While he gets the funding from an unnamed Senator (who appears to be getting set up to be a villain farther along in the series), all of the prep, insert, and extract has to be done under the radar.

The actual operation is fairly straightforward, with most of the obstacles simply being resistance from the Iranian Revolutionary Guard Corps, here mostly referred to by their Persian name, the Pasdaran.  The Iranian commander, Razod, does throw a bit of a wrench in the works, though I won’t say exactly how.  It’s not a twist that you won’t see coming, but the writer (Jack Hild on the cover, but Jack Hild was a house name who never actually existed; Alan Philipson actually wrote this one) does a good job of leveraging it as the fog of war making a relatively straightforward op far more complicated.

While everyone made it out of Africa in The Barrabas Run, the SOBs are not quite so lucky in this one.  While every Stony Man title I’ve read has had the same team of characters, it’s already evident this early in the series that nobody except maybe Barrabas himself is safe.

Overall, it’s fast, furious, packed with action that never gets cartoony, and bears a striking resemblance in many ways to similar tales that might have been written only a couple of years ago, even though it’s 33 years old.

One thought on “Soldiers of Barrabas #2 The Plains of Fire”