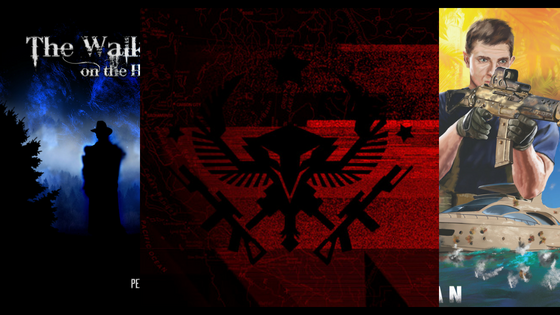 I’m reading Chris Fox’s book, Relaunch Your Novel: Breathe Life into Your Backlist.  With The Unity Wars launched, and so far doing just about as well as Brannigan’s Blackhearts (rather than exponentially better, as I’d hoped), I’ve started thinking about the fact that my backlist isn’t quite earning as much as it should be.

I’ve already done a little bit along these lines, with the new cover for Kill Yuan.  Reading Chris’ work, however, it could probably use some more tweaking, mainly in the blurb, keywords, and marketing aspect.

American Praetorians and Jed Horn get a bit thornier.

At this point, I think that a full relaunch of both series would be in order.  Jed Horn hasn’t ever done as well as the Praetorian books, in no small part because I simply marketed it to my fans, such as there are, and they were looking for military action.  It didn’t really make it in front of the more MHI/Repairman Jack sort of audience.  So, in addition to new covers for the first two at least (and probably new type for all four), it would benefit from a full relaunch.

The Praetorian books get a little more complicated.  Task Force Desperate was my first novel, and even going over it for the audiobook, I was seeing some of the rough spots.  Even worse, it has become dated by my use of real organizations and a geopolitical situation that was current in 2011, but has faded into the past.  It could do with a bit of a rewrite.  Similar problems apply to Hunting in the Shadows and Alone and Unafraid, especially since Daesh is currently on the run.  That problem wouldn’t be too hard to fix; simply rename ISIS in those novels to a fictional resurgent Sunni insurgency (which is inevitable, especially given the current Iranian domination of Baghdad).  I was getting my feet under me by the next two, so they shouldn’t need much.  The first two also definitely need new covers; Derrick was learning at the same time I was.  All of them are definitely going to need new blurbs and keywords.

The trouble with this idea is the fact that it is going to take time, time which will have to be carved out of an already busy writing schedule.  Not insurmountable, by any means, but it would take some extra scheduling.

What do you think, readers?  Let me know your thoughts in the comments.

5 thoughts on “Eyeing the Backlist”