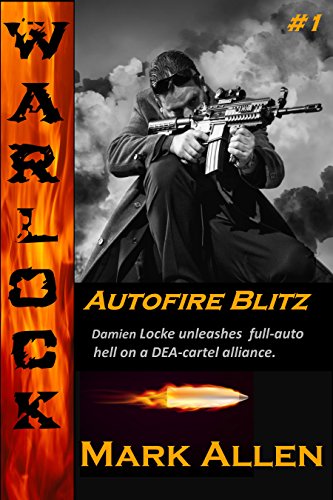 I’ve made no secret of the fact that in many ways, the Brannigan’s Blackhearts series is a bit of a throwback to the glory days of Men’s Adventure fiction, most exemplified by The Executioner, Phoenix Force, Able Team, the SOBs, and similar series.

Mark Allen’s Warlock is the same thing, if in a slightly different direction.  The cover should be a dead giveaway, too; it looks like a Mack Bolan cover.

Autofire Blitz is the first (and to my knowledge, presently the only) book in the series.  It introduces Damien Locke, callsign “Warlock.”  He knows that’s his callsign because it’s tattooed on him; he’s an amnesiac, apparently because of a head wound.  All he knows is that he has a talent for putting “warheads on foreheads.”

If that line seems a little corny, it kind of fits the book.  Don’t get me wrong; it’s not a bad story.  It’s just very straightforward and tropey.  It is an ’80s action movie put to print.

Locke is working as a mercenary, in the classic ’80s Hollywood sense of the term; he’s a loner and a one-man army, who hires out to kill bad guys in job lots.  He gets hired to find the kidnapped son of a DEA agent, and ends up hunting down a DEA-Cartel alliance from the US to Colombia.

The action is fast, furious, and gleefully over the top.  Autofire Blitz is a good title; Locke never uses single shots when a long burst will do the job.  The gore is pretty gratuitous; it’s almost cartoony.  Once again, very ’80s.  Bullets are essentially serving as tiny RPG rounds at times in this book.

While this list might seem slightly cringe-worthy in light of some of my earlier discussions of realism and authenticity, in Autofire Blitz, it all works.  This isn’t a book trying to be a serious thriller while its hero double-fists pistols and gets in fistfights with the President (and somehow doesn’t get body-slammed by the Secret Service).  This is unapologetic, over-the-top, comic-booky fun.

You might find yourself shaking your head a few times, but as long as you accept the story for what it is, you’ll probably be grinning a little while you do.

You can get it on Amazon.