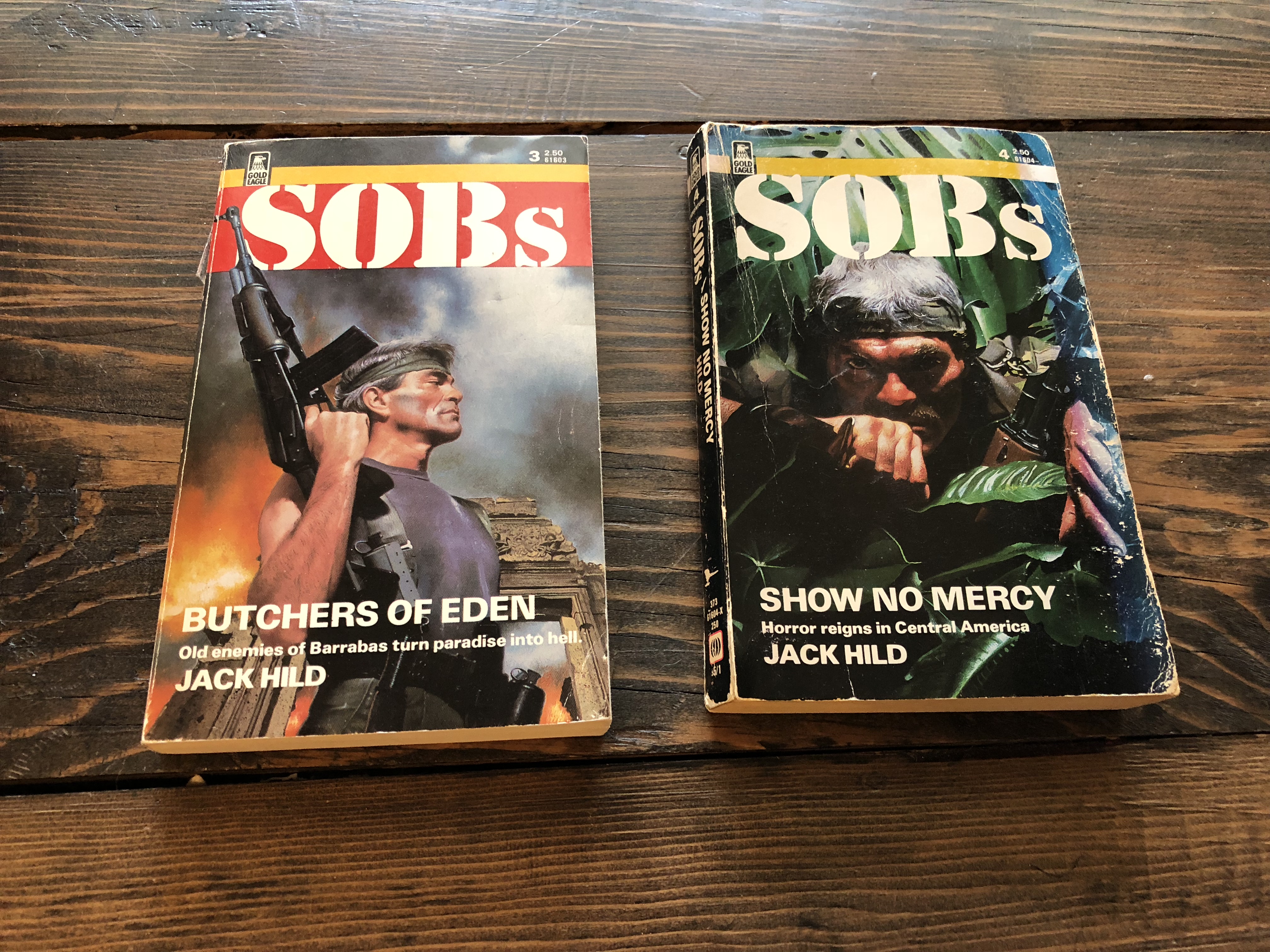 Been a bit behind on these posts; it’s been a busy couple months.  While I don’t have the complete series, I have a good chunk of the Soldiers of Barrabas, and I’ve been working through them.  While Stony Man was kind of my gateway drug to the Gold Eagle paperback scene, the SOBs series is generally, in my opinion, slightly better (in no small part because it becomes evident early on that none of the team members–except maybe Nile Barrabas himself–have plot armor).  There are a number of influences in the Brannigan’s Blackhearts series, but the SOBs are a big one, in large part because I’ve adopted some of the storytelling tricks of a short, team-based, fast-paced action adventure story from them.  (Introducing each of the team members in the first couple chapters as the team gets rounded up is one of the main points I’ve adopted, as opposed to the in media res, on-the-fly intros we got in the Praetorian series.)

So, let’s get started.

Butchers of Eden.  The third book, it’s just as solid as the second.  Barrabas is in Sri Lanka with his girlfriend (and sometime logistics enabler–she runs an import/export business that is also a front for a black-market empire) Erika Dykstra.  This isn’t a mission; it’s a vacation.  Erika and her brother Gunther have a branch in Sri Lanka, and they’re visiting their local manager, who happens to be an ethnic Tamil.

Now, this was written in 1984.  This was the height of the violent insurgency on Sri Lanka, as the Liberation Tigers of Tamil Eelam sought to break away.  In Colombo, in the south, that made Tamils targets, and Alan Philipson, taking another turn as “Jack Hild” used that to great effect in this book.

At least in Philipson’s volumes, there is a surprising amount of research for an ’80s pulp action adventure novel.  In a brief rundown (explaining the outbreak of a police-enabled riot), he explains the cultural clash of Sinhalese and Tamil, making it clearer and deeper than just “The Tamil Tigers are fighting the government” in just a few words.  From there, it’s off to the races.

Because the violence between Sinhalese and Tamil in Colombo is a cover for another operation, aimed at Barrabas himself.  Carl Heiss, a corrupt, ex-CIA nemesis from The Barrabas Run, and Colonel Nguyen Son Ny, one of Heiss’ accomplices from the Vietnam days, have set an ambush for Barrabas, kidnapping Erika and holding her in a compound designed to be a death trap for any rescuer.  Barrabas gets through to “The Fixer,” Walker Jessup, and Jessup gets the team together.  Mayhem ensues.

Which brings us to Show No Mercy.  I’m folding it in here because the less said about Show No Mercy, the better.  It’s the first standalone by Robin Hardy (who was one of the three writers in The Barrabas Run), and I’m hoping that he gets better as time goes on.

Short rundown of the plot: a giant, charismatic drug dealer is setting up a brainwashed cult army in Honduras, aiming to take over the entirety of Central America.  He’s getting HK G11s stolen and shipped in (the G11 was HK’s caseless rifle, and was considered The Future for many years, though it ultimately was too fussy a design to go anywhere and was abandoned before it could be adopted by any military).  Needless to say, the SOBs get contracted to kill him.

Now, the back of Butchers of Eden advertises Gulag War as being the next in the series, SOBs #4.  In actual fact, Gulag War ended up being #5, with Show No Mercy being released as #4.  I suspect that Gulag War wasn’t quite ready in time, so Show No Mercy got rushed out in its place.  I’m hoping that haste explains the shoddy craftsmanship in Show No Mercy, or else the series is going to end up more uneven than I’d hoped for, considering Hardy wrote quite a few of them.

4 thoughts on “More SOBs: Butchers of Eden and Show No Mercy”